Mason, a Nemetschek Group company, has announced the all new Cinema 4D R18. This next generation release of its industry-leading 3D animation, graphics, VFX, visualization and rendering software application contains a massive amount of new and interesting features and improvements to help creative professionals in digital production for TV, film, games, architecture, advertising and design.

Perhaps the coolest new features in Cinema 4D Release 18 is the new Voroni Fracturing features. This new feature enables non-destructive destruction. You can now systematically shatter any object into procedural fragments using virtually anything to control the distribution of the shattered pieces. Since Voroni Fracturing works as a native MoGraphs object it works seamlessly with Dynamics and all the effectors and falloffs. 01 – Cinema 4D Release 18 is being showcased and featured at SIGGRAPH this week in the Maxon booth. Product will ship in September.

Another highlight of the new features include new knife tools. R18 features all new knife tools. The new Line Cut tool lets you draw cuts across one or even multiple objects and tweak them on-the-fly with an interactive preview.  You can then remove parts or split objects based on the cuts you make.

Mason is previewing the new features for Cinema 4D R18 at Siggraph in Anaheim, California, happening from 24-28 July. Feature highlights include:

There are many smaller but interesting new features to mention. One is the new Parent Constraint parameters which enable a “local offset” that is animatable representing the offset the target (parent) has from the constrained object (child).

There is also new support for Pixar’s OpenSubdiv library, something that was added to sister Nemetschek Group company Vectorworks’ application in its last release in 2015. For team render or render server there is a new Restart Jobs After Unexpected Server Termination option. In the viewport there is now support for reflections and new Screenspace Ambient Occlusion option. 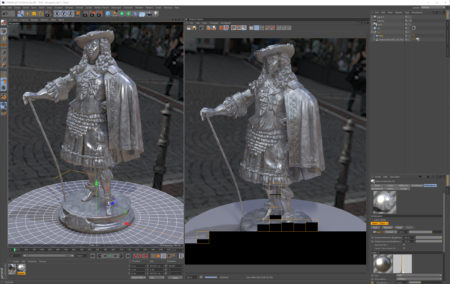 02 – Cinema 4D R18 will ship in September of this year and features dozens of high-level new features and many more smaller improvements.

“MAXON continues to build upon its 30-year legacy of empowering our existing and new customers with unprecedented performance and accessibility for streamlining and simplifying design workflows,” said Harald Egel, CEO & managing partner at MAXON Computer GmbH. “Cinema 4D Release 18 builds upon that foundation with powerful new tools and refinements so that creative professionals can successfully handle the demands required in today’s motion graphics, VFX and visualization environments.”

Cinema 4D Release 18 is scheduled to ship in September of 2016. Complete pricing and upgrade information is available here at Maxon.net. Available for both Mac and Windows the system requirements can be found here.

The below video was made entirely using Cinema 4D R18. Quite cool…check it out!