The new Vectorworks 2010 – Some More Details

In this article we discuss some more details behind Nemetschek North America’s Vectorworks 2010 release and product line, including background information on internal development strategies, market focus related to MEP and Structures integration via BIM and other key notes.

Nemetschek North America was really smart this year in the way they approached the release of information about the new Vectorworks 2010 product line. The company had its first ever online virtual event for press and VIPs on back-to-back days. When I spoke to Sean Flaherty, CEO, he stated that it wasn’t just about cost this year in this tighter economy, but that the online event allowed them to reach more key people.

“An issue with many folks,” said Flaherty, “is they don’t have two or three days to devote to travel and an all-day conference event.” “With this event we are able to reach far more key people and that in turn gets us greater high-level feedback.”

Key feedback is more important than ever for this company as Nemetschek North America has developed specialized internal teams devoted to performance and stability. Vectorworks itself has been in a state of some fundamental re-engineering since the integration of the Parasolid modeling kernel technology that was introduced in version 2009.

In this version Vectorworks 2010 introduces further technology that comes from its partnership with Siemens PLM Software in the form of parametric technology that generates the DCM (dimensional constraint management) system. Architosh will be looking at the DCM in a more detailed report coming up.

This version also has nearly all of the program’s modeling technology based on the Parasolid modeling kernel.

A Sophisticated Platform for BIM

Sean Flaherty, CEO, has expressed that the company has been devoting quite a bit of resources towards these re-engineering efforts. The company is not without some creative ideas for how to make BIM work better, but they need the foundation of the program to be right for the features they are thinking about.

“This re-engineering is important,” said Flaherty, “because we want to make sure we don’t build features on top of an unsophisticated platform.” “Parasolid gives us the most capable platform in the industry to build great features on.”

“We see ourselves as the makers of a design-centric BIM (building information modeling) product.” Flaherty noted. “We want our customers to be able to represent any imaginable geometry they can think of.”

In addition to the Parasolid kernel work that has been going on behind the scenes of the software, opening up and exposing new capabilities within the program, there are several interesting new features that Nemetschek North America have implemented that offer architects the design freedom and flexibility they need.

One such key feature that is modeling oriented is the new methods for “wall sculpting” introduced in version 2010. You can now add or subtract forms from intelligent walls and these new formal changes become one with the behavior of the wall. Good examples include piers and architectural protrusions or subtractions. 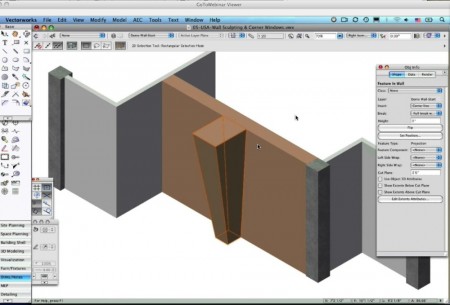 Another key feature that touches on 3D is the new Planar Graphics capability. Vectorworks 2010 makes it easy to integrate your 3D BIM model–or modeling in general–with 2D graphics. This creates a rich opportunity for new presentation methods.

Looking at the Product Line and the Future

As a BIM product aiming its guns at the top BIM competitors in the world, we wondered if there were any plans for MEP and Structural solutions under the Vectorworks brand name. It turns out there aren’t any.

“We are not moving to analysis of structures,” said Sean Flaherty, CEO, “because we see this as part of the solutions available within the BIM community.” “What we want to focus on is making sure we have great interoperability.”

IFC (Industry Foundation Classes) and excellent file interoperability are more key to the Vectorworks 2010 product line. “Vectorworks as a BIM solution is more focused on architectural needs,” said Flaherty. “And we have a lot of structural engineers as customers, but they use Vectorworks in tandem with dedicated analysis programs.”

The company’s industry product line-up is not changing any time soon, said Flaherty. Nemetschek’s strong markets center around architecture, landscape design and entertainment and lighting, which is served by Spotlight.

To learn more about Vectorworks visit them here.