BlackSpectacles Software Survey May Do More Harm Than Good

Billed as the software you need to know to get a job in 2017, Black Spectacles’ Annual Software Requirements Study has Revit, AutoCAD, and SketchUp as the three must know applications in demand at top architecture firms. But is this list good for the industry at large?

Here’s a quote from the intro: “The following data will help you focus on what skill sets you need in order to get you to the top of your game.”

What This Survey Report Really Says

There are a few things this study really says, some of them quite obvious and others not so much. The first thing is that while the following listings of software skills are “required” according to many of the job postings within the top 100 architecture firms, they are not required in all of them. Secondly, and related to this, the more experience required (trench time) for the position the lower the importance of the software experience required. 01 – Black Spectacles Software Requirements Study is an interesting industry report, but just how much value it provides the industry can be questioned.

That last part makes sense. Senior level positions are involved in more management tasks, field-based, and client-facing endeavors. Conversely, younger architects with a lot less experience do need to skill-up on the latest tools as much as possible, implies the study.

The list itself is a curious “top 100” architecture firms. The question is “top” by what measure? Architectural Record ranks the firms by millions of dollars for architectural services performed in a given year. It grabs the firms from Engineering News-Record’s Top 500 Design Firms list. Record’s own list goes up to 300, but it contains firms that are literally architect-free, meaning they are pure engineering firms.

There are curious obvious omissions. For example, Foster & Partners is not on the list. Fosters looks for people with Microstation experience. The 100th firm on the list had billings in architecture worth $25.5 million.

To put that figure in reference, 104th on the Architecture Record Top Firms List (which includes 300 firms) is Cambridge Seven Associates, Inc., at $24.9 million. I know that firm, how many people are there, and what kinds of projects they do, and I can tell you right now that Foster & Partners is tremendously larger in people and billings. 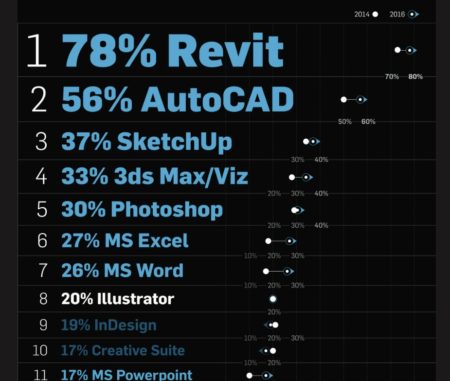 02 – This study paints a false global picture of the AEC software industry and its focuses and concerns. It implies that top US firms are an accurate proxy for top global firms. This isn’t the case. The United States is “herdish” in its adoption of software in AEC, compared to other countries. Firms like Foster & Partners, a Bentley Microstation customer, is just one example among dozens.

These top listings are not only based solely on billings but are US-centric. While many of these firms do work all over the world and have offices abroad, these firms are still US entities. This means firms and opportunities at places like Foster & Partner’s US locations or locations abroad where a US architect could practice, are all omitted.

This bias towards the US paints a false picture of global architectural industry software usage. At Architosh we have been studying market shares in this industry for well over a decade. We know that in just about every other market outside the US that software usage is much more pluralized.

For example, in Japan, no one software has captured more than 1/3 of the overall market. Not only that but in other countries, like Japan, dominance by seat count may be different than dominance by true jobs available. In some countries, like Japan, there may be true giants—and only a handful—who dominate a large segment of the billings in absolute dollars but don’t dominate in absolute numbers of projects and job openings.

Who Benefits And Who Loses From The BlackSpectacles Study?

The BlackSpectacles software requirements study is definitely interesting. However, one must wonder if the survey does more harm than good, for the industry at large.

On the positive side, the survey is definitely useful for younger architects coming out of school or even still in school. While students, in particular, may be using programs like Grasshopper and Dynamo or programs like V-Ray or Maya, what this list quickly highlights is that what is promoted in architecture school isn’t the same as in practice. This list helps them focus on tools that will help them get jobs—at least in the US.

On the negative side, the list itself can highlight an age-old divide between theory and practice; today the divide between the academy and main street practice is played out in literal software tools versus theory texts and ambiguous representational systems like it was in, say, the 1990’s. Highlighting the divide may play out in various negative ways but like a recent article about a new free architecture school, one thing this conformity can do is crush creative and original ambitions in architecture. 03 – Algorithmic super design tool, Grasshopper is a low-demanded skill set among the so called Top 100 architecture firms. This begs the question: what does the world “Top” mean in this study? It actually means money brought in (annual billings).

Nowhere is this more apparent than the lack of software skills required for algorithmic design. PowerPoint is apparently more vital knowledge than both Grasshopper and Rhino. Yet, the latter is said to be vitally critical to the work of staritect Bjark Ingels’ firm BIG. And they don’t use Revit in their main Copenhagen office for BIM but rather ARCHICAD.

And where is “hand sketching” as a skill located? Well, at just 3 percent one gets the fast impression that this list of top 100 firms doesn’t ask much of its staff to sketch out ideas—on paper or on a digital tablet.

And speaking of mobile tools…?

Only Navisworks and Newforma have true mobile versions of their tools and they both rank incredibly low on the list. There are literally no major mobile apps on the list of required tools for jobs. Where is BIM 360, or Bluebeam Revu, or PlanGrid, or Procore?

The magnitude of the list implies a vital importance to the software tools on the list. This, of course, is somewhat self-reinforcing.

Much like the Republican presidential debates held several months ago, those placed in the center of the debate podium tended to stay at the center. Based on popularity, from the onset, Donald Trump stayed front and center and eventually won the final election. Why was it necessary to always put the front-runners at the center of the stage? What could have changed if things were more random?

The BlackSpectacles software study benefits its leaders on the list the most, followed by job seekers in the US only second. But the list itself speaks of a value on financial performance far more than it does on design quality, design democratization, and practice innovation. Production and old-school communication tools (and yes Microsoft apps are old-school) dominate the list—at the cost of focus on design innovation tools (algorithmic design), BIM collaboration tools (eg: no BIM 360, Trimble Connect, etc), and even true best-of -class visualization tools (eg: V-Ray).