At AIA National Convention in Chicago last week, both AutoDesSys, the makers of formZ and bonsai 3D software, and Autodesk, the makers of Revit and AutoCAD, were on hand to talk about and show key upcoming software technology.

formZ 8 and its new SubD’s

AutoDesSys, which was a bit off to the side and away from the Software Pavilion, had a 3D printer on hand and was producing tiny skyscrapers from the Chicago skyline, among other 3D objects. formZ has already been capable of supplying modeling data for a 3D printing workflow but the new subdivision modeling technology in the upcoming version 8 makes it even better. 01 – AutoDesSys’ booth at AIA Chicago with a 3D printer and its formZ goodies!

Other key new features in the new formZ 8 include a brand new OpenGL rendering engine for enhanced realism and interactivity, including ambient occlusion (AO), and new organizing capabilities within its materials editor and library. While perhaps not being particularly discussed at this moment, the company also has recently stated its interest in computational modeling with a new visual scripting technology—all in the works of course. Such a capability should be welcomed by the many Mac-based architects who don’t currently have access to native OS X apps in this area. To learn more about formZ 8 read our recent feature article here.

Project Skyscraper is the future of BIM collaboration for the design software giant, says Angi Izzi, who is Sr. Manager, Industry Strategy and Marketing for AEC at Autodesk. In a private discussion Ms. Izzi reviewed the main aspects of where this new technology is going and how Autodesk is pushing for more “openness” within its software solutions. By the way, the “openness” dialog is very welcoming to many, says Ms. Izzi. She acknowledged that the company does recognize that interoperability within BIM is vitally important and that toolsets span a range of offerings from many companies.

That being said, openness doesn’t necessarily mean a focus on a singular interoperability standard. Later in another report on a talk with Trimble we can touch on this issue further from another perspective.

The company recognizes that more and more firms want to find ways of simultaneously co-authoring models across company firewalls.  While Project Skyscraper is a technology preview—and not an actual shipping product yet—Autodesk has been testing the software with real customers. 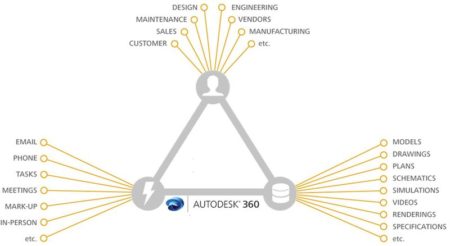 Project Skyscraper has the capacity to allow firm A’s multiple offices to collaboratively work across time zones with each other and with firm B. And the implication is clearly that this might include engineers and consultants working on a Revit BIM model in a co-authoring, multi-office workflow. 03 – Not the sharpest image but a view of Autodesk’s booth at AIA National at Chicago.

As part of Autodesk’s increasing sense to become more open, Ms. Izzi told me that Project Skyscraper will allow stakeholders to collaborate across a range of devices and platforms with the chief medium being the web itself. Project Skyscraper intends to wage war on the non-structured communication medium of emails with attached PDFs—the lowest common denominator in AEC digital information sharing.