Back in the late 90’s Apple’s customers followed the company through some of its darkest years, purely on the emotional connection that they felt about the company. They believed they saw in Apple their core beliefs about who they were as individuals–daring artists, photographers, architects and creatives…people who in their own way, in their own domains of expertise, were setting a course to change the world.

And this of course was reflected in their products and marketing…

Apple is, what TED Talk luminary speaker Simon Sinek has called, a true leader. Not because they have power and authority within their industry–because for decades they didn’t have much–but because for years its loyal customers chose to follow them simply on the basis of what they believed.

They shared a common belief about the power of individual creativity and empowerment through simple, beautiful and accessible computing tools.

As it turns out this plays a key part in why Japan’s largest architecture firm, Nikken Sekkei, has chosen to partner with GRAPHISOFT of Hungary, one of Apple’s most accomplished software developers.

In the case of GRAPHISOFT, they believe in something different than their biggest competitors. They believe in what has been branded Open BIM, which some may argue or criticize as a non-leader’s survivalist strategy, not a business philosophy. 01 – Simon Sinek’s TED Talk that true leaders start with “Why” played a key part in GRAPHISOFT’S presentation of BIMcloud at its press event this week in Tokyo…it reflects the way they see themselves as global BIM software innovators. (image courtesy of GRAPHISOFT)

And while there may be some kernel of truth in that criticism, it would be both naive and foolish to explain what has been termed the Open BIM Movement as just a way for the Davids to fight the Goliaths in the global AEC software industry.

Foolish because, despite everybody’s tending view that the world is getting smaller (and thus more alike), the way to success in some countries may have more to do with culture than despite it. In other words, and to be more blunt, GRAPHISOFT is winning in Japan because its Open BIM beliefs align well with Japanese cultural beliefs. In Japan, the concept of teamwork and the value placed on us versus me matter quite a bit more than they do in other parts of the world, especially in America.

In Japan, companies have a tradition of mutually beneficial partnerships. It’s a distinct part of their brand of capitalism and, partially, a legacy carry-over from the history of  keiretsu enterprises. To be more specific, in the Japanese AEC (architecture, engineering, construction) industry much of the larger scale work is more “design-build” oriented than, say, the United States. And this approach, where architects and builders see each other as vital partners and never adversaries, even when working within distinctly separate companies, is driving home the importance of cooperation, open standards, and data and file interoperability–all cornerstone features of the Open BIM movement.

This partnering culture developing around BIM in Japan is in stark contrast to market conditions in the United States. In America the building industry tends to naturally herd itself into just one corner of the pasture. As a result, the technology providers in software and hardware serving the American market can think differently than elsewhere in the world. Specifically, the leaders may entertain the fantasy of total market domination in a zero-sum game. 02 – Graphisoft’s official BIMcloud registered logo mark. BIMcloud has already been tested by Obayashi Corporation and others like Nikken Sekkei here in Japan under beta.

In such a mindset it’s not possible to develop something like what Toyota developed years ago here in Japan. Referred to reverently as “The Toyota Way” the corporate philosophy by the world’s number one car manufacturer is a direct expression not just about how they work but of their values.

And one of the key values in “The Toyota Way” is human development–commitment to people. To Toyota it extends out beyond just commitment to its own employees but also to its partners and suppliers.

To achieve this, Toyota helps its partners through a process called cross-functional teaming, where members of both companies get together to discover and fix problems so they can become better partners.

In a very uncommon move within the AEC market, Nikken Sekkei has established a partnership with GRAPHISOFT of Hungary that echoes long-standing traditions about how Japanese companies work to help each other, including the use of a type of cross-functional team echoing The Toyota Way approach.

03 – Viktor Varkonyi, CEO of Graphisoft, speaking at the Roppongi Hills Press Event in Toyko this week to an invited international press and its largest Japanese customers, including Obayashi, Kajima Corp and others. (image courtesy of Graphisoft)

Their agreement in essence calls on GRAPHISOFT to place Nikken Sekkei’s design process front and center and make sure that Japan’s largest architecture firm’s priorities are part of GRAPHISOFT’s product roadmap. In turn, Nikken Sekkei will assist the Hungarian BIM software provider with advancing its activities, and promoting BIM in Japan and Asia. 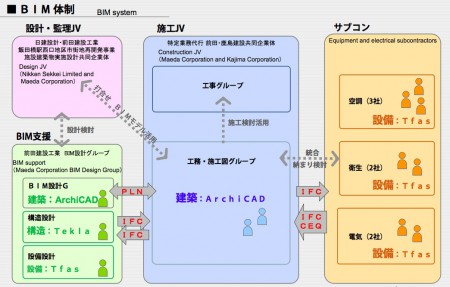 04 – For the Lidabashi Station project Nikken Sekkei had two major BIM partners, including Maeda Corporation and Kajima Corporation. The diagram above shows their interdependent BIM workflow requirements and centering around Open BIM tools like ArchiCAD 17 and Tekla Structures (image courtesy of GRAPHISOFT Japan).

This doesn’t mean that these AEC giants don’t or won’t use software products from rival American companies like global market leader Autodesk. In fact they do. But what matters to them is that BIM must be “open.”

Openness is truly important to the Japanese BIM movement. The country has many of its own Japanese software tools. In fact, large firms like Nikken Sekkei even have proprietary software like Buildings3D, which is a structural analysis tool developed specifically for Japan.

With a country just getting past a magnitude 9.0 earthquake in 2011, and its attendant Fukishima nuclear disaster, Japanese AEC firms either don’t want to or can’t fully entrust foreign software makers to solve and address these regional issues for them.

With such realities to deal with here in Japan, this nation’s largest AEC firms aren’t particularly drawn to who has the largest market share, but rather who reflects their core beliefs that in turn respond to their core challenges.

And in Japan, the decision as to who to do business with in regards to BIM is turning out to be GRAPHISOFT.

[correction: Nikken Sekkei’s billings or fees amount was incorrectly quote earlier at nearly $900 million USD, when in fact this figure should be stated as over $400 million USD.  30 Mar 2014.]

Architosh will have several more reports on our week here in Tokyo, including photos from our visit, an analysis of GRAPHISOFT’s and Nikken Sekkei’s “press day,” a review of Nikken Sekkei and their award-winning architecture, and other interesting snippets. So stay tuned…

To learn more about BIMcloud you can read our full report here. For GRAPHISOFT.