SketchUp Pro 2013 doesn’t appear to contain any new major features on the 3D modeling side of the equation, but rather focuses on its integration and compatibility with other products, including Trimble’s other AEC offerings. 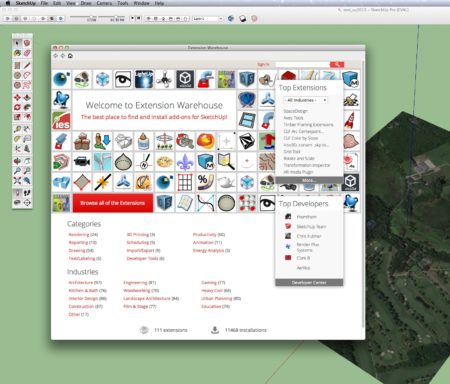 01 – Extension Warehouse, a view from within the new SketchUp 2013. The window provides searching, browsing and previews, including video of various plugin extensions for SU 2013. “We may have changed companies, but our commitment to delivering smart and efficient design tools is stronger than ever,” said John Bacus , director of SketchUp product management at Trimble. “We noticed that a big percentage of our professional users were using plugins, so part of making SketchUp more efficient is making it easier for them to find the tools they need, when they need them. We often say that SketchUp is better off because of the work done by our developer community—now, SketchUp users are better off too.”

We wanted to point out very clearly that there are three (3) products for users with SketchUp 2013. There is SketchUp Make 2013, the free version of SketchUp. There is SketchUp Pro 2013 the paid complete version. And there is SketchUp Viewer. All of these are available on both Mac and Windows, and as you can read on Architosh’s comments here, the company is very committed to Apple’s Mac platform long-term. That is certainly great news for longtime Mac-based SketchUp users who may have wondered initially about their software of preference when Trimble purchased SketchUp from Google.

The Extension Warehouse certainly makes it very easy to find ways to extend the usefulness of SketchUp Pro. And it makes it clear just how big of a “platform” SketchUp has become worldwide. It is also clear that the name change for the free version aligns Trimble to defend its market share in the expanding “makers market.”