SketchUp Studio 2020 provides accessible energy and daylighting analysis tools and Architosh gets into the details in this review.

It has been since August of 2014 that we last published a review of SketchUp and in that version (SketchUp 2014) the big news was the support of Industry Foundation Classes (IFC) file format in the world’s most popular 3D modeler. Since that time a lot has taken place in the world of SketchUp. For starters, while IFC export was new in SketchUp 2014 when we reviewed it that year, somewhere along the way IFC import was also supported. (We’ll mention more notes on BIM and SketchUp toward the ends of the review).

Also new since our last review six years ago, Trimble acquired Sefaira, the popular energy analysis software that works with BIM tools and SketchUp models. These tools are now included in what is known as SketchUp Studio, Trimble’s flagship version of the software. SketchUp Pro is still the most popular version of the software used in AEC workflows, while SketchUp Free and SketchUp Shop are versions for personal use.

We noted in our 2014 review that there really weren’t any major new modeling functionalities added to SketchUp compared to prior versions. Trimble’s development efforts over the years have largely been focused on other areas; in some regard, SketchUp as a modeler is fully matured for what the company wants in its core capabilities. In other words, the assumption is that Trimble is letting third parties tackle more advanced features in modeling powers. When I asked Hariharan Natarajan, Customer Success Manager, Trimble, if this assumption was correct he confirmed by saying that “there are lots of specialties and types of users of SketchUp and they all have unique needs.”

And in mentioning the vast ecosystem known as Extension Warehouse, he says, “So we have created a platform that SketchUp users can plug into and just self-serve,” meaning that what users get today with SketchUp is a powerful and popular 3D modeler where they can direct their attention to thousands of extensions written by third-parties to tailor SketchUp to their specific purposes.

Insofar as architects are concerned, or even AEC users at large, that subject of Ecosystem versus Modeler is one Architosh will have to in full force in another article. Our primary goal with this review is to review SketchUp Studio, which encapsulates SketchUp Pro and Sefaira and to partly introduce the reader to Sefaira’s energy and daylight analysis features.

The big new change in version 2020 of SketchUp is that layers are now renamed as “tags.” One might think that renaming something is hardly much of a change, but in truth, there is much more to this adjustment. Let’s talk about why this is.

“Layers” was always the wrong word in SketchUp. In other 3D, CAD, and BIM software programs, the use of “layers” tends to mean more than just controlling visibility. Layers tend to represent the structure, order, and the protection and visibility of objects. The way you protect, structure, and organize objects in SketchUp is through groups and components, in addition to layers, now named tags. The improved Outliner palette dovetails with Trimble’s decision to call rename the Layers palette Tags and encourages users to use the Outliner for structuring their model by groups and components. Now it is not necessary to use hundreds of formerly called “layers” to structure your SketchUp model.

Moreover, an important new feature in Layers 2020 is the ability to control the visibility of objects by tag from the Tags control palette. Speaking of palettes, in Layout 2020, they have been updated; users now can control various aspects of viewports without affecting other viewports.

In version 2020, the formerly called Layers palette is only renamed (to Tags) and other aspects largely remain the same. Still, Trimble wants users to now organize and provide structure for their models not by having zillions of layers but by using the Tags palette in conjunction with updates to the Outliner palette.

Outliner now features small but significant changes. A new eyeball icon enables the user to control the visibilities of groups and components in your model. In this way, Outliner works similarly to many other professional 3D modeling, rendering, and animation tools. A model in SketchUp can consist of nested groups within groups. But with the new Outliner, the user has visibility control of these hierarchies.

These “groups” and “components” in Outliner can be renamed—and it is advised that you do. By naming groups and components in Outliner, you can now tap the power of the search tool to filter for specific items in your model. A single click on the word “Group” in the Outliner should give you that field in blank-form so you can rename it. In this image, I have isolated all things in the Outliner that match the search term “slats” including groups name as such inside of the “unnamed” group.

For example, I was able to name wood shading devices on this model “Wood Slats” and searching by slats helped me isolate these objects in the model. One thing I did discover however is that when you search (filter) by a word or name, only those groups or sub-groups with that naming match will appear. This can be detrimental in some instances. For the wood slat shading devices, I created in this modern house (see the image above and below), naming every single piece or board can be time-consuming and also disruptive to your workflow. But what if I want to show what that shading panel looks like with every other board not there? That’s where the problem comes in. If I search the Outliner for “slats” it finds all the wood slat groups in the model but doesn’t let me see into groups nested in these main groups because they are not named and thus cannot match “slats” in the search field.

Sometimes this default control is good; in this case, it is bad. It robs me of the new power of the Outliner. A simple toggle button named “View Sub-Groups” in the Outliner would let me turn off and on the ability to see what is nested inside a group without having to have an exact match in the Outliner’s search field. It is impractical to assume or to make users name every single group nested inside other groups.

And finally, speaking of naming. If I have named groups “slats” I can find them with the letters “slat.” I don’t have to have all the letters match exactly. This is another interesting control level that Trimble might put into the hands of users—exact match versus partial match. 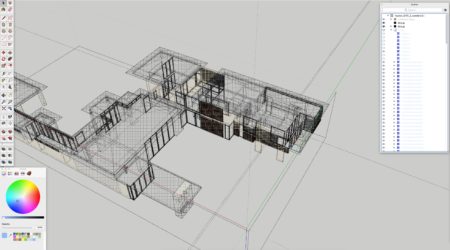 One final important point about Outliner. When you select a tag in the Tags palette and make it invisible (previously known as making a Layer invisible) the groups and components assigned that tag do not fully disappear in the Outliner. Instead, they show up grayed out but selectable.

Other Items and Layout

There are other minor improvements in the basic functionalities of SketchUp 2020 but these items are the biggest and most important features. Layout 2020’s big new feature is the changes to the Tag and Outliner palettes and the new visibility controls in Outliner in conjunction with how things get structured in models. Layout 2020 is also faster at viewing larger models and has numerous small improvements.