A little know but growing app called CloudCities is primed for major attention and use at Autodesk University next week. The 3D map technology will provide attendees with guided, intelligent information.

Don’t be confused if you think of Lando Calrissian of “Cloud City” in Star Wars: The Empire Strikes Back. The names do sound alike but CloudCities—the app—hails from Switzerland and today it’s helping professionals right here on Earth. And you can experience and use it at AU 2016.

Antje Kunze is CEO and co-founder of CloudCities and she wrote to Architosh to announce that her company will be providing an interactive 3D conference map for attendees to better navigate and experience the largest event Autodesk host each year.

The map will be displayed on multiple large screens. The 3D map provides an overview of events and exhibits both indoors and outdoors on the Vegas strip. A website will also display the maps. More than 10,000 people attend AU each year and attend 700 sessions and a large exhibit hall. With so much going on and so much to see, the interactive 3D map will be an invaluable guide for all that attend and use it. From its use, one can find and locate classes, keynote talks, and exhibitors.

CloudCities is a 3D modeling, visualization, and collaboration environment you interact with via a web browser, principally. It can work with 3D models from numerous sources but one of the primary sources will invariably be SketchUp.

From its beginnings, CloudCities has had an impact and focus on urban planning and some collaborative ties with companies like Esri. It’s founder and CTO have presented at planning conferences like “Esri Europe, Middle East, and Africa User Conference,” for example. 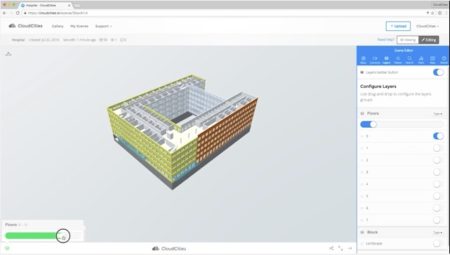 The application is also optimized for mobile and VR. You can open a scene on your smartphone, for example, and view it using Google Cardboard. One of its powerful features is its Smart Layers which enable the grouping of content in time sliders. You can then scrub the slider to make various layers appear or disappear in the model. This creates an animated effect of the building’s layers up or down. CloudCities also supports sun and shadows studies abilities.

Consistent with urban design and planning agendas, as well as with architecture, CloudCities features a dashboard where you can connect your models to data to visualize analytics connected to your model. It supports scene search and has an attribute editor that operates like a spreadsheet, much like what was recently introduced into SketchUp 2017. Lastly, you can save your camera positions as bookmarks, contextualize your models by linking them to maps (there are several maps to link to as bases, and run light simulations for shadow studies as mentioned above.

More on CloudCities at AU 2016

A CloudCities solutions team created the AU 3D model-map, based on 2D CAD and GIS plans. The 3D data and the event information were integrated using the CloudCities platform. 03 – Another image of the CloudCities Interactive 3D model for next week’s Autodesk University 2017.

“The 3D conference map supports our effort to make Autodesk University 2016 more experiential and more visible,” says Teresa Anania, Director, Subscriber Success, Autodesk Inc. The natural interaction with the 3D model creates an engaging experience that invites participants to explore and connect with the event, its exhibits, and attendees.”

“We’re delighted to be selected by the Autodesk Event Technology team to build and host the interactive 3D map for Autodesk University 2016,” said Antje Kunze, CEO of CloudCities. “We’ve created an application for communication and presentation of ideas that are intuitive, immersive and scalable. With the latest release, CloudCities adds support for Autodesk FBX. This exchange format makes it possible for Autodesk AutoCAD, Autodesk Revit, Autodesk AutoCAD Civil 3D, and Autodesk InfraWorks users to bring their 3D models into CloudCities.”

CloudCities will showcase their online 3D platform at booth # 2761 during the conference.  To learn more about CloudCities go here.