We begin our wrap up of Design Summit timed features and stories with this Gallery of images from Chicago 2016.

It has been a month and a half since the Vectorworks Design Summit in Chicago and as we are closing in on all our final reports and features from that conference, we thought it would be nice to show some of our pictures from the event itself…with notes of course.

Below are just some of the pictures taken during the event. The conference this year was attended by more than 600 Vectorworks users from around the world, as far away as Japan and Perth, Australia.

As noted in our show coverage for its inaugural event last year, this small and intimate conference has a nice balance between training, personalized attention, AIA worthy credit learning sessions, techie talk, design talk, at least two keynotes, the a mini expo, nighttime dining and entertainment, architecture tours and plenty of time for networking. While most of the attendees are architects, quite a few are also in landscape architecture and entertainment venue design (Spotlight users). In the image above, on Day 1, many attendees pile into conference rooms to learn stuff about Vectorworks mostly. Some sessions focus on Renderworks. This year the Marionette algorithmic design session was packed full of people, standing room only. The new technology provides Grasshopper-like functionality directly inside Vectorworks. In the image above on Day 2 folks are beginning to stream into the large conference hall. Outside this space were little tables setup for entering contests and signing up for other things such as Architecture Tours of Chicago. 03 – Sean Flaherty began the talk speaking about his new role at the parent company, Nemetschek Group. Here he is joking about all the hard work they do in Germany, particularly during the fall Octoberfest.

In the image above former CEO Sean Flaherty is reviewing the fun he has when traveling in Germany. He noted that part of the reason why the parent holding company created the new role for him was due to time constraints and pressure from traveling while being the CEO of Vectorworks. His new full-time position will be based in the United States and will be solely focused on helping strategically expand the Nemetschek Group. In the image above web view 3D capabilities were shown at the event, and folks at the AIA convention just passed got a chance to try this new tech out directly. Here Dr. Sarkar and Steve Johnson on stage talking about the importance of VR and more direct access to 3D models through simple technology like a browser or iPad app. 05 – The Vectorworks Design Summit was extremely well attended for its second year, doubling its prior year attendance and then some. Image: courtesy, Vectorworks, Inc.

Vectorworks users from around the world, including Europe, Australia, Japan and the Americas were all in attendance in Chicago. While the US itself is not the largest market for Vectorworks, the size and growth of the show has been a boosting factor for the company. 06 – One of several good BIM sessions…this one by Flansburg Associates Architects of Boston.

While dark, the image above is from a session by Flansburg Associates, Architects, in Boston. The Boston based architecture firm is fully Vectorworks-based and has been for decades. A leader in BIM implementations for its academic type projects, the slide above is showing the BIM model for a new high-school in Massachusetts. 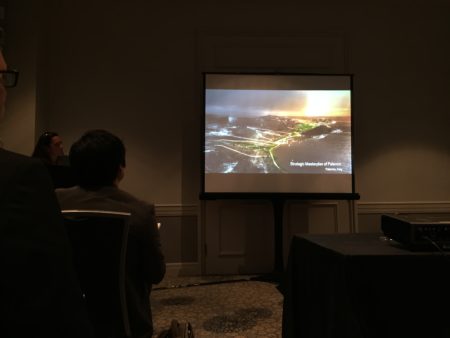 07 – In a smaller room a session is packed in to hear from the principals of Italy’s award-winning architecture firm 5+1AA as they show us their work and talk about from Sketch to BIM.

We noted the caliber of architectural talent at the Design Summit in other posts, here in the slide above work from the Italian architecture firm, with offices in both Italy and France, show some of their master planning work. Like the Boston firm Flansburg Associates, 5+1AA has spent considerable time working out a complete BIM workflow wherein they are capable of integrating IFC files from team collaborators using packages like Revit. One of the key reasons for Vectorworks users to attend the Design Summit is to hear and see how firms have made the BIM transition using Vectorworks and specifically how they approach this process in detail and work with many engineers and others around the world using other BIM applications. 08 – The customer appreciation party at the Design Summit.

In our final image, the second night is devoted to a Customer Appreciation party, again held at a major art museum. From Philadelphia to Chicago, the company has begun to set a precedent for picking cities that feature an art museum for its major and final evening. Like last year, attendees were free to roam the entire museum. This was interesting because what this meant is that they rented out the whole museum and this required staff to hold guard in all the gallery rooms.

The Vectorworks Design Summit in 2016 seemed to be another huge success for the company. It will be interesting to see if they double their attendance figures to 1,200 in 2017. That would start to make the event a much different feeling event. I think one of the reasons why this user conference has a certain attractive quality is because it is intimate yet packed with a lot of optionality.

In speaking with several attendees the feedback reflected the great mix of learning, networking and inspiration. It seems particularly meaningful for Vectorworks users to get a sense that they are “not alone” in practicing around this minority BIM application in the United States.