Amy Bunszel of Autodesk talks to Architosh about AutoCAD, Mac and the new iPad Pro

Apple delivered on longstanding rumors of a more powerful, larger iOS driven iPad—the new iPad Pro—but stunned many in the IT community with its superbly executed new Apple Pencil and new physical keyboard smart cover. Select software developers, like Autodesk, were invited to get their hands on the iPad Pro early. In this interview Amy Bunszel, VP for AutoCAD at Autodesk, talks to Architosh about what the iPad Pro makes possible for AutoCAD in mobile, discusses the new hardware inputs like Pencil versus Touch and also provides readers a snippet about what’s important and going on with AutoCAD on Mac.

During Apple’s September Event and prominent launch of the new iPad Pro, Autodesk’s AutoCAD 360 was showcased running on Apple’s new, bigger and much more powerful tablet device. Autodesk quickly spoke to us about what the world saw running on the new iPad Pro, which optionally includes an innovative new stylus Apple calls the Pencil.

In our earlier report we mentioned that we had a much larger discussion with Amy Bunszel, Vice President of AutoCAD, at Autodesk. Here is that complete conversation below, where we talk in more detail about the new iPad Pro, what Pencil can do for AutoCAD 360, and AutoCAD on the Mac.

AFR (Anthony Frausto-Robledo): Amy, what has Autodesk done app-wise with respect to the new iPad Pro with Pencil and keyboard?

Amy Bunszel (AB): We have worked on a few things to take advantage of the new device. We took a look at the new Pencil and the new physical keyboard and started to ask ourselves what kinds of commands and capabilities can we add that would drive toward more professional use and editing on this device.

AFR: So was AutoCAD 360 shown at the Apple event early preview or prototype development?

AB: It’s all prototype work that we have been working on.

AFR: So what were you showing people after the event in the press area? What types of things?

AB: We were demoing some capabilities with the Apple Pencil on the new iPad Pro. I’ll just walk you through it…imagine that you take the Pencil and with it you apply some pressure on the screen. A cross-hair will appear. And then, depending on what the cross hair intersects with, the geometry on either side, you will get a distance value. So you can move the Pencil around and your measuring will adapt depending on where you are on the drawing. And from that point it is really simple to tap and then add a dimension if you want to.

So that was one of the new things we were showing. The other cool tool what we call the Erase tool, which is a way of erasing with the new Pencil by swiping with the Pencil across the lines and objects and they disappear and you delete them that way. So this new tool is really precise and you have nice controls using the stylus that way.

AFR: So there have been other styli before. Was Autodesk sort of waiting for something like the Apple Pencil or was there ever some kind of earlier work at Autodesk where the team was digging into what was maybe possible on a device like this with a stylus like the Pencil?

AB: I would say that we were pleased to see the Pencil…but we are also still pushing on Touch. Internally we develop and run a bunch of prototypes where we test them and see how things work. We are very much still interested to see what is possible with Touch. But for our users who are interested in more precise, hardcore-type editing, having additional input devices at their disposal is really great. 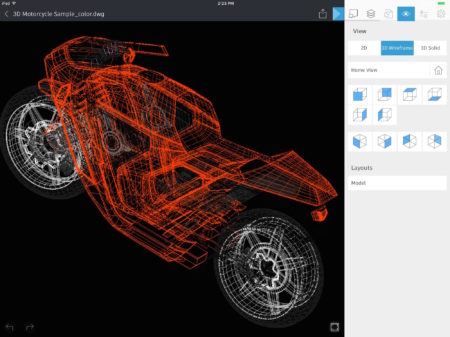 01 – A sample image from Autodesk’s AutoCAD 360 on an Apple iPad device. The new iPad Pro with Pencil is propelling new possibilities and developers like Autodesk aim to leverage these features in new functionality. image: Autodesk, All rights reserved.

AFR: And what constitutes “hardcore” editing for your mobile users? Compared to AutoCAD on the desktop, what would you say are those functions that folks are interested in seeing come down onto the iPad version?

AB: In many cases today I would say they are not necessarily starting the drawing on the iPad, but they are getting pretty complex drawings on the device, so they want to be able to interrogate the data, interrogate properties and be able to precisely manipulate the geometry—whether it is controlling numerically with the new keyboard or having the input you need if you are dragging geometries around. Those are the kinds of things that people want.

And they are also looking for performance on the mobile devices. This new device is just really fast. So we have been able to load drawings that are over twice as large as drawings in the past…. the iPad Pro is huge, it’s fast, it’s so clear…the 60 frames per second rendering is just tremendous…

The drawing shown of the San Francisco bay area has more than 320 thousand entities…and it moves around so smoothly! So I think graphics is also important to our users, no matter what platform they are on. So graphics and graphics fidelity is super important. AFR: So Apple is making some rapid performance gains with their chips, and these increase multiples are really quite astonishing…much faster than the rates of improvement on the desktop side that Intel is creating…so at some point it seems like the Touch-based devices will truly equal desktop counterparts in performance.

AB: Right, and I think for us we are looking at…’how much of AutoCAD does it make sense to put over on devices like the iPad Pro?’

In many cases for our user who are out in the field—they are very mobile—it’s a question of how can you extend your AutoCAD experience to any platform? When you’re in the office at you desktop with your huge monitor or multi-monitors…with keyboard and other input devices…when you are in the field with a mobile device…or maybe you are using Web-based access…For us—this allows us to go even further in giving our customers that anytime, anywhere access to their data.

AFR: So it’s been awhile since I’ve spoken to Micah about AutoCAD on Mac, what is in the pipeline in this area that you can maybe talk about today? What’s the update on AutoCAD for Mac?

AB: While I am not able to tell you exactly about any release dates…but I can tell you a little bit about some of the things developing. I can tell you that when we started offering AutoCAD LT [for Mac] on the annual term, the user base really responded well to that. We are seeing a lot more licenses with AutoCAD LT on the Mac, particularly with that new price point—which is around $360 per year.

So in terms of what to add? We are always looking at the most frequent version of AutoCAD for Windows and trying to figure out what makes most sense for the Mac. But more importantly, for users who are in hybrid environments, where there are people with Mac and Windows, we continue working on making that easier for people.

And we also continue to look at performance, graphics, and anything that we can do that takes advantage of something unique that Apple has done for the Mac. And these are really meaningful directions for our users on Mac.

AFR: Can you give me a sense of the audience that is partaking in the increased uptake of the AutoCAD LT on Mac’s new annual license subscription?

AB: More of them are smaller businesses where it is easier for them to pay on a month-to-month or annual basis than the single big up-front payment. It can also be those who simply need an extra license in a temporary or uncertain situation because they have a burst of work and so they can scale up with this option more cost effectively.

AFR: Thanks for speaking to me about AutoCAD and the iPad Pro and Mac.

Amy Bunszel: You are welcome.