solidThinking, Inc., this week has introduced a brand new solidThinking Evolve 2015, its cutting edge surfaces, solids and NURBS modeling and rendering application for industrial and product design and all design disciplines in need of advanced surfacing tools combined with onboard rendering features.

This new version of Evolve (2015) features a complete 64-bit Mac code base, which will aid the application in numerous ways but primarily in vast overhead for complex and large models. While the new 64-bit Mac support is a welcome addition for users on Apple’s platform (solidThinking Evolve runs on both Windows and Mac OS X), the new PolyNURBS tools with Nurbify are half of the “hero” features added to this release. The other half are those rendering features the company is calling “cutting edge.”

The big new cool modeling update is the PolyNURBS tools. Basically, any polymesh can, with a click of a button, be turned into an editable NURBS surface. A range of new tools enable you to create stand-alone polyNURBS faces (surfaces) or add faces to an existing polyNURBS object. With the combinatory tools of subdivision surfacing you can refine and smooth a polyNURBS as well as move from a polyNURBS face back to a polymesh. 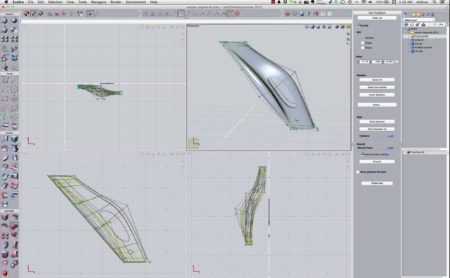 01 – The new solidThinking Evolve 2015 includes a bevy of new modeling tools, including new PolyNURBS, which offer new ways of going between polymeshes and NURBS surfaces.

Other new features included in the modeling domain include a new Add Edge Loop tool and Faces Bridge tool, among others. There is also a new series of updates to the Drawing Environment and new support in a new Section View tool. In the latter, the user can create and edit section views to be used in the drawing environment or visualized in the modeling workflow.

Evolve 2015 introduces a brand new next-generation rendering engine, called evoRender, and the entire rendering tools user-interface (UI / UX) and user-experience has been changed. Rendering now happens in the modeling environment window (see image below) rather than into a new window. Evolve 2015 now supports Luxion’s KeyShot 5 rendering options and there is CUDA GPU support across some parts of the rendering environment. There is also a new option when saving called Save As > Evolve Bundle, which bundles all image files associated with the model.

Getting Up To Speed: New Evolve 2015 Webinar

solidThinking Inc. is having a free webinar on Tuesday, 14 April 2015, which will introduce the new solidThinking Evolve 2015 software. There are two times (9 AM EDT and 2 PM EDT) where experts will go over all the latest new features.