In this companion feature article to our latest product review on Inspire 2014, Architosh looks at the specific nature of using solidThinking Inspire for architectural design.

Inspire has three key aspects to it with regard to architecture. The first is that the tool can be used to generate interesting and unexpected forms which often take on a bio-morphic quality to them (as you will see later in the article). The second is to use Inspire to help create lighter weighted structures. This can mean the whole building or components of the building at both the large and small scale. Lastly, Inspire 2014 can be used to help architects develop structural detailing that is innovative and expressive.

The Article in Three Parts

In Part 1 of this article we will look immediately at how Inspire 2014 works for load type situations in architecture to help create lighter weighted structures. In Part 2 we will then show and discuss some of the ways Inspire can generate truly innovative morphological forms for architectural design, including some real examples. Finally, in Part 3 we will review a particular problem for architectural detailing of a structural nature to help architects create interesting solutions.

In our recent review of solidThinking Inspire 2014 we cover the basics of working in Inspire and we also demonstrate this process with something architects intuitively understand—the structural dynamics of a simply-loaded beam.

Architects are not typically trained in using any type of sophisticated computer software tools for studying structural engineering. The architect’s goals are to understand the principles of engineering so that designs are, from the onset, reasonably feasible and express a fidelity to the facts of physics. Typically, for licensing exams architects must understand both general and lateral structures topics at a fundamental level only.

These days sophisticated computer software enables structural engineers to visualize forces, loads, and a structure’s response to its environmental conditions, including seismic. The purpose of bringing some of the sophistication of computer-aided engineering (CAE) to the front-end of the design process is to principally avail to the designer a deeper understanding of his design decisions as to how they will eventually bear on the project structurally.

By knowing more earlier, the architect can exercise both more freedom in expression while having a realistic constraints feedback system inform the conceptual design work.

While not specifically designed for the purpose, even the “normal modes” analysis features of Inspire 2014 can help provide architects with deeper understandings around structures—as in the example of a conceptual skyscraper below.

All structures tend to vibrate at particular discrete frequencies. Dynamic loads, like fluctuating airflow, will cause structures to vibrate. (see skyscraper model example, image 01, below). With the analysis tools it is now possible to visualize displacement (animated as well), factor of safety, percent of yield, tension and compression, maximum shear stress, von Mises stress, and major principal stress—all in solidThinking Inspire 2014. 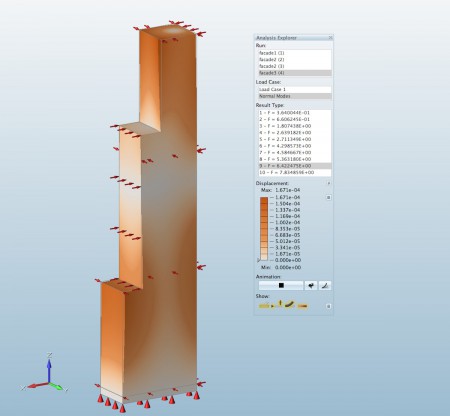 01 – analysis of normal modes on a conceptual skyscraper structure.

This will be of some use to architects doing tall buildings at the conceptual stage. In our sample conceptual skyscraper tests, using real-world dimensions and applied lateral wind forces, the results of the analysis provided conceptual insight into how the structure might actually move and why.

A caveat should be stated here that this to-scale tower in Inspire 2014 is of course fully solid and no such building is. It could, of course, be hollowed out, but the point of the exercise was to see how this full-scale model in Inspire would respond to a normal modes analysis, revealing relationships between its form and a normal modes analysis. Given its particular shape the tower bends and twists as indicated. (see movie below).

In the video above we can see a frequency analysis using the normal modes calculation feature and then have it animated, revealing various movement on the structure due to an array of lateral loads.

In the actual review article (which we recommend to read also) we started with something any architect can understand, a simple-loaded beam. In the next few examples we’ll look at a roof truss type problem.

To start we’ll make a basic pitched roof condition. (see image 02 – 03 ). The idea here is to create a volume which represents the space where a truss would carry and resolve its loads to its supports. The depth of the space equals the tributary load area, roughly 24 inches. Next a block is created on top of this to load forces onto. Inspire works better when loads are not directly placed on the “design space” but like the example skyscraper tower above, one can in fact load forces directly on a “design space.” (see the related product review for more info on a “design space” in Inspire 2014.) 03 – The optimized result from the first run after some modifications were made. The target mass reduction was 30 percent of design space volume.

If a load block is going to be fully supported under a “design space” then there is no real reason to make it particularly thick. In fact, by doing so you add weight if the material for that load block is a metal. It is kept thin in this case. Next, support blocks are created at the ends where the truss would meet a beam or wall support. (image 02)

To apply a force or load you use the Loads/Supports tool. A realistic pounds per square foot pressure is evenly applied to the top load blocks (model elements in grey). Then an optimization is run. The resultant model is shown above (image 03). As you can see, the top load blocks act as if welded to the “design space” optimized mass and form a composite structure, thus becoming a type of top chord, if you will, of the final solution.

In this next example a bracket support (or set of supports) is imagined for holding up a potential snow load on a shading device (brise soleil) on a building. In this example what is modeled is a support block for transferring the load (of snow) that would be carried to the supports for the brise soleil (shown in grey). The brise soleil itself is not designed or modeled.

In the first image the “design space” is setup. (image 04 – reddish brown) An even load is placed on the top block and it gets transferred through smaller blocks resting on the “design space” itself. Load supports are added at the bottom and the side, as attachments to the facade (wall) or ground. 04 – A brise soleil type loading problem is created. The “design space” is where the brackets will take shape. 05 – The first set of runs shows this analysis run on a resultant shape. 06 – In this modified design the resultant optimization run ignores the lower supports entirely.

Because we are not sure how the loads will be passed through the “design space” and what resultant optimized form/mass we may get, the support on the side is first placed low on what would be the wall. Next, an “optimization run” reveals an interesting truss like shape. (image 05). Not happy with the stress at the top of the optimized shape in image 05, and its oddly unattractive overall geometry, a new mass optimization run took place on the same load but with an “added” support at the wall towards the stressed sections of the first result. (image 06)

The resultant optimized form resembles an interesting bracket-like shape and the lower support locations are totally abandoned (as determined by Inspire 2014)). A thicker mass is left up at its top towards the back-end facing the wall side. The resultant geometry is quite clean-looking and the lower leg to the lower wall connection could be quite interesting. From this result an architect may then further develop a steel bracket support for a brise soleil that, at certain times of the year, may be asked to carry a substantial load due to seasonal snow loads.

Let’s now look at some truly interesting morphological form examples, including a built project from Inspire.