Anyone who has ever attended a computer conference and exposition knows that the expo floor is where all the great action is. The energy is palpable. At Macworld Expo that energy is concentrated around Apple’s tremendously large booth space, a giant blacked-out zone with a huge theater space in the middle. In shows past they have even used two side theaters to showcase different items. It must take a team of 20 people or more to put the Apple booths together. No small expense for sure. 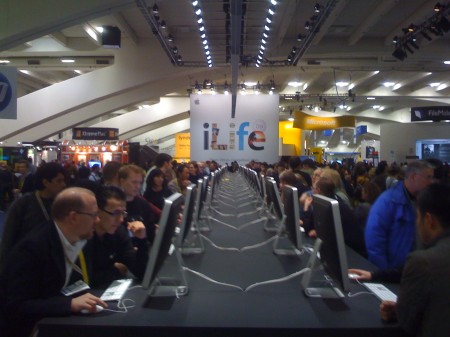 Since the heart of Schiller’s announcements were the new iLife ’09 product suite, a series of iMacs loaded with the “digital life-style” suite were a popular draw as folks concentrated on monitors showcasing how iPhoto ’09, for instance, can dovetail beautifully with Facebook’s photo gallery feature.

While iPhoto ’09 got a lot of attention during the keynote it was also iMovie ’09 that garnered much praise from experienced users, such as our own Britney H.R., who as a film student at Art Center College of Design, was keenly aware of the mistakes Apple made in the previous version of iMovie. Apple made up for those mistakes in this new release by putting back all the features they took out of the last version. A full re-write of iMovie has now taken place twice in its life time. The mice ears were being handed out at Microsoft

Mice ears were handed out at Macworld this year at Microsoft’s booth. I didn’t spend much time there so I’m not sure why. As you can see a few of the ears can be spotted in the photo above as attendees watched demonstrations of Apple’s new iWork ’09 application suite. As always Apple's booth was a standing room only affair.

Apple’s booth is always the center of attention at Macworld, which is why it is hard to conceive of the show without Apple attending it. The rumor yesterda was that Apple wants to skip Macworld next year — and possibly all years after — so that it can become the new darlying of the big CES (consumer electronics show) in Las Vegas which takes place the same week every year.

AppleInsider reports that Apple has already signed a deal and is bringing some of its biggest developers to the Las Vegas show with them. When one thinks of the logic in such a move there is inevitable upside to it: direct product comparison with Microsoft; direct product comparison with RIM (Blackberry folks), Nokia and Palm in the smartphone race against the iPhone; and direct product comparison in the “digital life-style” software space where Apple is leaps and bounds ahead of Microsoft and everyone else. What other product out there has the sophistication and ease of use of Apple’s iPhoto or iMovie yet dovetails so beautifully with Internet social net darling Facebook and Flickr? The answer is nobody.

We will be reviewing iLife ’09 this quarter to show you why this product is so outstanding.